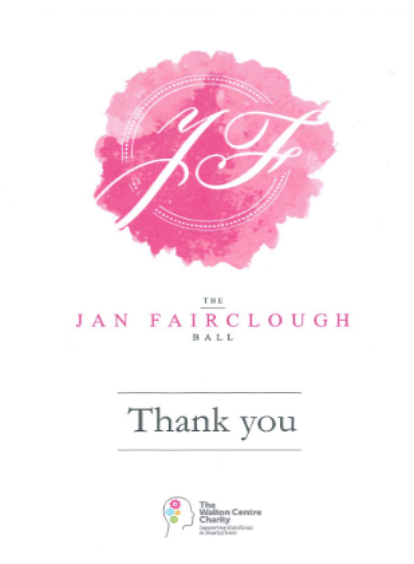 We are proud to once again be sponsors of the Jan Fairclough Ball tenth Anniversary which supports the Walton Centre Charity.

The Walton Centre is a leader in the treatment and care of neurology and neurosurgery, placing the patient and their family at the heart of everything they do. As the only specialist hospital trust in the UK dedicated to providing comprehensive neurology, neurosurgery, spinal and pain management services they are proud to be rated as an ‘Outstanding’ Trust by the Care Quality Commission (CQC), and champion change throughout the field of neuroscience. Originally formed in 1992, the Trust received Foundation Trust status in 2009.

With around 1,450 staff, The Walton Centre treats more than 127,000 outpatients and 18,000 inpatients each year with conditions including:
• Head and spinal trauma injuries
• Tumours of the central nervous system, both cranial and spinal
• Neurovascular diseases
• Epilepsy (including a full surgical programme)
• Movement disorders (including the provision of a deep brain stimulation service)
• Pain, with a particular focus on trigeminal neuralgia
• Multiple sclerosis and motor neurone disease
• Chronic neuropathic pain, facial pain, headache and migraine

The Neurosurgery Division is one of the biggest and busiest in the UK, performing around 3,000 elective surgical cases, 2,000 emergency surgical cases and 1,000 day case procedures each year.

The Neurology service is delivered by a multi-skilled professional team, and sees over 75,000 new and follow-up patients as well as treating over 4,500

The Jan Fairclough Ball, held in memory of our Charity Patron David Fairclough’s wife, saw an amazing £72,000 raised towards the hospital’s latest appeal to fund a Neuro Virtual Reality Simulator – a training tool for neurosurgeons and the first of its kind in the UK.

The glittering 10th anniversary event, held at The Titanic Hotel in Liverpool, was hosted by TV presenter and radio broadcaster Steve Hothersall, with an emotional welcome by the Fairclough family at the start of the evening, and a presentation from Consultant Neurosurgeon Professor Paul May about the Neuro VR Sim later that the night. There was also a film which showed the impact the event has made over the last 10 years, showcasing projects at the hospital which have benefited from the fundraising over the years.